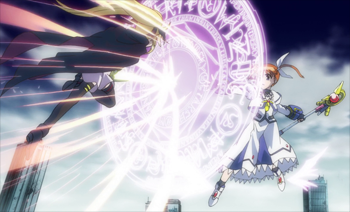 Traditional Hermetic Magic often required creation of elaborate pentacles, pentagrams, magic circles, runes, etc. before a spell could be cast. These would typically be scratched into the ground, or made with special materials. This takes too long to be practical in a fight or immediate crisis, but it does look really cool.

Many works get around the time limitation and amplify the coolness factor by having special effects do the work. As soon as the mage calls out the attack, any required circles, designs and written magical incantations appear glowing in the air. Sometimes the spellcaster actually draws them in midair; at other times, these designs are prepared by the mage beforehand and manifest from some sort of device, or whatever force the mage contracts or serves does it for them. But this is mostly speculation on our part, as it's rarely, if ever, shown how it's actually done.

Being easy to animate either traditionally or in CG, this effect originated in Anime & Manga, specifically among Hermetic-flavored Magical Girls.

In latter years, it has become increasingly common in other media. Many video games adopted the Simple, yet Awesome effect: circles are easy to notice and have clear boundaries, thus, they're ideal to designate the effect radius of a magical Area of Effect attack in RPGs and Real-Time Strategy games.

From anime and gaming, this effect has also spread to modern fantasy webcomics and, having come full circle, manifested even in the artwork of 3rd edition d20 Dungeons & Dragons. It's hard to deny that glowing magic circles and mystic runes floating in the air around the spellcaster look so much cooler in a visual medium than a wizard waving a staff around.

See also: Simplified Spellcasting and Sphere of Power. Magic portals very frequently have these inscribed on them to show how magical they are. When the runes come before the magic happens, that's Runic Magic.