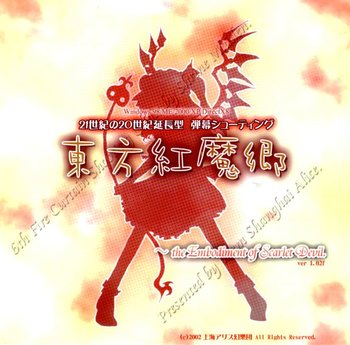 The game that brought a revolution.
If we suppose the mist is the work of a human, one could say that the human must have eaten belladonna flower.
In the very center of it all is an island, rejected by mankind simply because they could not live there. On that island is a mansion; one of few windows.
Inside the mansion that knows neither day nor night, "she" was there.
—From the prologue
Advertisement:

Touhou Koumakyounote "Scarlet Devil Land" ~ the Embodiment of Scarlet Devil is a video game created by Team Shanghai Alice for Windows computers in 2002. It's the sixth videogame installment in the Touhou Project franchise, and the first in the Windows series.

The remote mountain region of Gensokyo has become covered by a strange mist that chokes out the light of day. Shrine maiden Reimu Hakurei and witch Marisa Kirisame see that it's coming from an island on the lake, and head there to investigate.

The first game for Windows PCs, EoSD was designed as a fresh start from the PC-98 era, trimming down the cast to protagonists Reimu and Marisa,note The former of whom also had the spelling of her name changed from 靈夢 to 霊夢 renaming the setting from "Eastern Country" to "Gensokyo", and introducing the iconic Spell Card mechanic. However, it wouldn't be until its sequel that the modern Touhou franchise was fully formed.