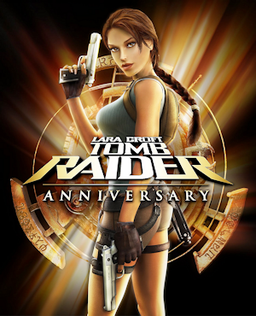 "Sometimes, to understand your present, you have to go back... to your past."
Lara: I'm afraid you've been misled. I only play for sport.
Jacqueline Natla: Which is precisely why I've come to you, Miss Croft. This is a game you've played before.
Advertisement:

Lara Croft Tomb Raider: Anniversary was released in 2007 and is the eighth entry in the Tomb Raider series.

At one point, an Anniversary edition was being made by Core Design, but this project was shut down because they no longer owned the rights to the series. The development of a game celebrating Tomb Raider's 10-year anniversary was instead transferred to Crystal Dynamics, resulting in this game.

As in the original, the game centers around Lara Croft looking for a piece of the Scion, a powerful artifact, having been hired by a powerful and enigmatic businesswoman, who wants the artifact for her own reasons. After having braved various deathtraps and aggressive wildlife, Lara gets her hand on the piece, but on her way out she is double-crossed by her employer. She fights off the lackey sent to relieve her of the artifact, and sets out to find the two remaining pieces, for the artifact is speculated to be a vast library of information, which could reveal the mystery behind the disappearance of her mother.

The locations she visits during the game include Peru, Greece, Egypt, and a forgotten island that was part of Atlantis.

Critically, the game was received very well; it pleased those who were irritated by the various changes incorporated in Legend, with the chatty sidekicks gone, a far more complex level design, and a longer game overall. Lara's moveset has been extended far beyond that of her original incarnation, and the level design was changed accordingly, shortening some parts while extending others. Some of the changes as a remake came under heavy scrutiny though, especially Atlantis and the T. rex encounter, which were both generally regarded as being very lacking even by those with no particular memory of their original incarnation. And while controlling Lara remains as smooth as in its predecessor, platforming is sometimes made unnecessarily hard by an uncooperative camera. Despite playing fluidly and having lush graphics, the game remains the lowest selling entry in the Tomb Raider franchise.