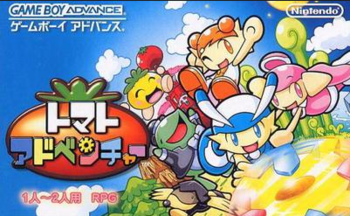 DeMille and his various friends and allies, ready to save the world from... his least favorite food, apparently.
Advertisement:

Tomato Adventure is an RPG video game that was released for the Game Boy Advance in 2002. It was developed by AlphaDream, who later developed Mario & Luigi: Superstar Saga, and was never released outside of Japan.

In the Ketchup Kingdom, during the Tomatoversary, King Avira has invented a machine called the Super Caracooker, which transforms objects, people, etc. into playthings such as toys and playgrounds. DeMille, the player character, watches this on TV in his school bus home; he was forced to live in Cobore Village due to his dislike of tomatoes (anybody who dislikes tomatoes is labeled a "dropper" and forced to live in Cobore Village until they change their attitudes towards the food). He and his girlfriend Patharan are allowed to leave the village for one week during the Tomatoversary, however, and use the opportunity to go find Patharan's Gimmick Robo. King Avira's henchmen Brikky and Grikky capture Patharan to use her Heart Energy to power the Super Caracooker, and DeMille must save her and the entire Ketchup Kingdom with the help of the Gimmicks, the mechanical weapons made for him by his friend Seremo, by obtaining six items called the Toy Parts from King Avira's six Super Kids.