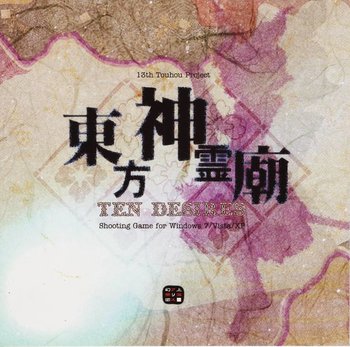 A DJ's quest to Take Over the World.
"To understand the ten desires of a human is to know them fully. In the past, the present... and the future..."
—Toyosatomimi no Miko
Advertisement:

Touhou Shinreibyounote "Divine Spirit Mausoleum" ~ Ten Desires is a video game created by Team Shanghai Alice for Windows computers in 2011. It's the thirteenth videogame installment in the Touhou Project franchise, and the start of the "third generation" of Windows games.

It's spring, and both Gensokyo and the Netherworld have become filled with divine spirits - nascent, fleeting gods born from the desires of living things. Seeing that the spirits are being drawn to something near the Human Village, Reimu, Marisa, Sanae and Youmu head out to investigate.

The game features the Divine Spirits mechanic - a second class of collectable items that appear when enemies are killed, bosses are damaged, or at certain scripted events. In addition to boosting the player's lives, bombs or score, some spirits can fill up a "Trance meter" which can be discharged to enter a temporary Super Mode.