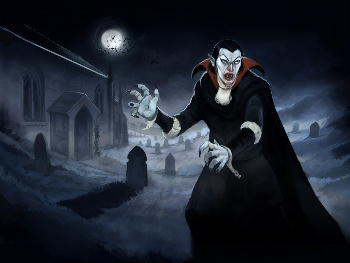 So creepy that even the vampire wants to leave.
"Mist... cemetery... Halloween. Should end well."
— Giles, Buffy the Vampire Slayer
Advertisement:

Cemeteries have long held an air of creepiness about them. They are, after all, the places where we bury the dead, and our deceased loved ones in particular. Places that consequently remind us of unpleasant things. Places that can sometimes manage to creep us out simply because of the way they look.

Little wonder, then, that so many Fantasy and Horror works like this setting. In one of these graveyards, it is Always Night, or occasionally twilight. Most often the moon is full, for extra supernatural points. Clouds may also be present, or fog, or snow. And, most importantly... it often turns out that the dead people there aren't really dead.

This is the usual birthplace and/or home of The Undead, and in a Zombie Apocalypse you can expect every grave to be a Clown-Car Grave. If you're lucky, the local vampire coven didn't get the memo about this not being the best place to sleep, so you'll just need to find their Ancient Tomb and hope there isn't a night guard (and that they're heavy sleepers).

Michael and his date pass by a cemetery just as the dead begin to rise from their graves.

Michael and his date pass by a cemetery just as the dead begin to rise from their graves.