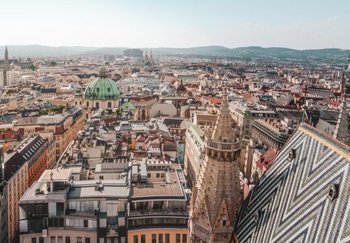 Vienna is the capital and largest city of Austria, and the only city to be a state in its own right. As opposed to much of the rest of Austria, it is not situated in a mountainous region, though its western outskirts are somewhat hilly. It is divided into 23 districts, two of which are separated from the rest by the river Danube. In fiction, expect to only see the inner districts, where the monument density is somewhat high, and Schloss Schönbrunn. Apart from the regional accent, there are not only one, but several types of additional dialects spoken inside the city. It is also somewhat unique in having many, unrelated names in different languages: Wien, Vienna, Beč, Bécs, Dunaj, to just name a few.

Its origins are lost in time (evidence of settlement goes back to 500BC). What we know is that the Romans founded the fortified outpost Vindobona there at 15BC to defend the frontier, which was at that time running along the river Danube. The area of this outpost can still be discerned in the inner disctricts, where Roman ruins have an annoying habit of turning up and interrupting every other building project. Through the middle ages, the city grew, becoming seat of the Hapsburg dynasty in 1440 and through this, de facto capital of the Holy Roman Empire with their rise to power, and later the capital of the Austro-Hungarian Empire. After the world wars, it remained the capital of the now somewhat diminished Austria.

Being the capital of a huge, multilingual empire meant, of course, that the city has always been quite international, something that current residents (whose names seldom belong to the German language after the second generation) often tend to forget. It also means that compared to the rest of the core Austrian (read: German-speaking) country, Vienna has always seemed a bit mysterious and alien, and not entirely friendly to core Austrian interests. This prejudice remains to this day.

On the positive side, the Hapsburgs always considered themselves friends of the arts, importing musicians, artists and scientists to their seat of power. This has created a strong tradition of arts and sciences in the city. Many classical musicians and famous scientists come from or have at some point called Vienna their home. This tradition continued even after the fall of the empire and gave the world things like the First Viennese School (classical music), the Secession (art/architecture), psychoanalysis and the Viennese Group (philosophy). It also gave the world Wiener Schnitzel, Sacher cake, Strudel, Danish pastry (which in Denmark is called Viennese bread, and in Vienna Kolatsche) and Goulash. (Please note, Wieners are not called such in Vienna. Neither are Vienna Bread (a type of roll or in some places a Danish pastry) or Wienernougat.)

In present times, Vienna is the seat of the Austrian government and also home to several UN subsidiaries, the IAEA, OPEC and the OSCE. It also hosts the traditional New Year's concert which is transmitted worldwide.

Viennese people have a tendency to be seen as loveably grouchy or Jerks with hearts of gold. They also are said to have a fascination with the macabre and a somewhat dark outlook on life, which they like to express in Self-Deprecating Humor.

In fiction, Vienna is either depicted as the classical Hapsburg center of arts (period piece) or as a center for spy thrillers (WWII-modern setting). Either way, expect loving shots of every tourist monument in town without any regard to their actual position, horse-drawn carriages instead of taxis (only used for tourist rides in real life) and lots of classical music. In actual Viennese/Austrian productions not intended for export, expect Black Humour. Lots and lots and lots of it. Depending on the type of production, it might then get worse or just degrade into slapstick, but it will likely never be completely without Dramedy. Vienna also has stood in for other cities such as Paris, Moscow or Bratislava.