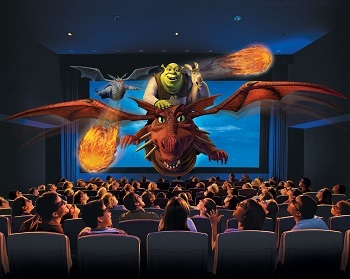 Shrek 4-D, also known as Shrek's 4-D Adventure, is a 3-D Movie with in-theater special effects that can be found at the Universal Studios parks in Japan and Singapore. At one point, it was also at Universal Studios Hollywood, Florida, Warner Bros. Movie World and Movie Park Germany, but has since been closed at those four locations.

It is set directly after the first movie in the franchise, with Shrek and Fiona preparing to go off on their honeymoon. Their plans are interrupted when Thelonius, Lord Farquaad's henchman, kidnaps Fiona and takes her away into the woods. Shrek, with Donkey alongside, pursue the two into the woods, eventually discovering that the mastermind behind the kidnapping is none other than the ghost of Lord Farquaad himself, who vows to make Fiona his bride yet again so that he may become King of the Underworld. Shrek and Donkey are thus forced to combine their wits once more and set out onto another big adventure that involves graveyards, huge aerial dragon battles, and a massive waterfall in order to save Fiona and defeat Farquaad a second time.

The attraction first opened at the Florida, Hollywood, and Japan parks in 2003, and opened with the Singapore park in 2010. It also operated from 2005-2010 and 2008-2011 at Warner Bros. Movie World and Movie Park Germany, respectively.

Since its inception as a theme park attraction, the film was released onto DVD as Shrek 3-D, and has even been released in 2-D when it was shown on Nickelodeon in 2007 under the title Shrek's Never Before Seen Adventure, and has since been made available on Netflix and online, now titled The Ghost of Lord Farquaad.

After a 14-year run, the attraction was closed at Universal Studios Hollywood on August 13, 2017, and in 2018 was replaced with the DreamWorks Theatre, which highlights many DWA franchises, including Shrek, with the current main attraction being Kung Fu Panda Adventure. The Florida version of the attraction closed on January 10, 2022, with its replacement rumored to be a Despicable Me interactive attraction based on Villain-Con from the first Minions Movie. The Japan and Singapore locations remain open, but time will tell whether or not they'll be replaced in the future.

Tropes shown in Shrek 4-D include: