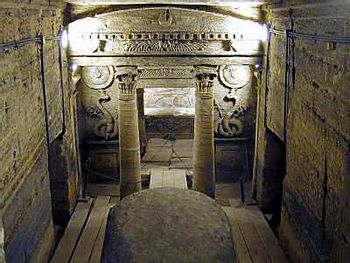 This choice is especially popular among vampires and mummies, although any form of pure evil should find that an ancient tomb makes an easily converted live-work space. The stone halls and Gothic decor will make you the envy of every angst-ridden teenager, and a coffin or mausoleum is usually available for your personal convenience. You can sleep until the foolish adventurers rouse you from your thousand-year slumber, and devour not just them but all mankind.
— How to Be a Villain, Neil Zawacki
Advertisement:

An important stock setting, and the natural habitat of the Adventurer Archaeologist and other adventurous types.

Popular in both horror and action-adventure fiction. Eldritch Abominations, Dracula, zombies, mummies, ghouls, demons, and other stock horror-movie monsters can often be found here. Usually comes in two varieties; the elaborate one built by a similarly-ancient civilization (Aztecs and Egyptians particularly) with plenty of Booby Traps and ancient curses, and a European-style gothic tomb full of gargoyles, vampires, skeletons, and corpses chained there by petty nobles.

May overlap with Indian Burial Ground, and in particularly elaborate cases, Temple of Doom. Note that a can of evil or Tailor-Made Prison may be disguised as, or converted from, a tomb. Either way, beware not to suffer the Curse of the Pharaoh.