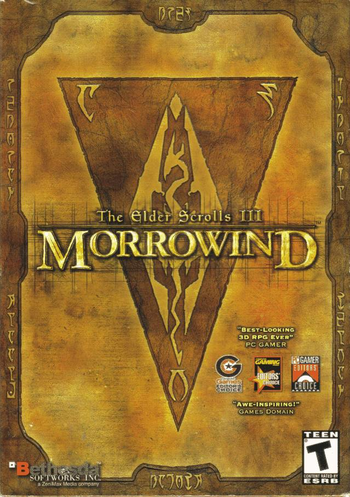 ...not even's last night's storm could wake you. I heard them say we reached Morrowind.
"They have taken you from the Imperial City's prison, first by carriage and now by boat, to the east; to Morrowind. Fear not, for I am watchful. You have been chosen."
— Azura, from the introduction
Advertisement:

The Elder Scrolls III: Morrowind is the fifth videogame in The Elder Scrolls series by Bethesda Softworks, released in 2002. Like the other games in the "core" series (i.e. the ones with numbers in their names), it is a Western RPG set in a massive Wide-Open Sandbox game world.

Morrowind was the first Elder Scrolls game to be released on a console (specifically, the Xbox) — in fact, it was the first major Western RPG to get a Multi-Platform release in a long while. As such, it also marked a major shift in game play and design philosophy. Gone were the nigh-infinite, procedurally generated worlds of Arena and Daggerfall. Instead, Morrowind is significantly smaller in scope than its predecessors (a "mere" 9 square miles as opposed to thousands, and a non-infinite number of side-quests), but manages to come off just as epic anyway thanks to the quality of the writing and the hand-crafted, diverse, exotic landscapes. Thanks to its greater availability and these philosophy changes, Morrowind was a critical and commercial hit, being Bethesda's Breakthrough Hit and introducing a massive Newbie Boom to the series.

The combat system is radically different from the rest of the series: while it is still real-time, character stats play a far larger role than player skill compared to the rest of the series. Like the other games, however, Morrowind offers Loads and Loads of Sidequests, of which some of the faction questlines are nearly as expansive as the main quest itself, and are neatly tied into the main story.

Set 10 years after the events of Daggerfall, a convict from the Imperial City Prison (the PC) is released on the Emperor's direct orders on the condition that you be shipped to the backwater province of Morrowind (more specifically, the even more backwater district of Vvardenfell, until very recently closed off to all foreigners on religious grounds). Guided by the Blades, the PC investigates the local prophesies of The Chosen One, known as the Nerevarine, who will save the land from the dreaded "Blight". Tracing the source of the Blight to the evil Physical God, Dagoth Ur, the PC is launched into a labyrinthine plot involving an Ancient Conspiracy, prophecies, lost prophecies, false prophecies, reincarnation, gods, backroom politics, gang wars, and The Corruption.

Morrowind is also notable for being much, much weirder than the rest of the franchise, being set in an alien landscape populated by Dunmer (Dark Elves), Bizarchitecture, dinosaur-like fauna, giant arthropods, Living Gasbags, Cthulhumanoids, and more.

In 2003, the Game of the Year Edition was released for both Xbox and PC. It includes all of the patches, DLC, and both expansions.

On April 10, 2018, Morrowind was released on the Xbox Games Store as an Xbox One backwards compatible title. This version can also be played on the Xbox Series X|S.

Despite its venerable age, Morrowind remains a classic and boasts a large player base to this day. It marked the point where Tamriel ceased to be a Medieval European Standard Fantasy Setting and became a truly unique Constructed World with highly memorable cultures, history, creatures, landscapes, mythopoeia, and characters. As its gushing fans will tell you, Morrowind does imitate the works of J. R. R. Tolkien, but in a much different way than most fantasy worlds do — by putting the same amount of thought and detail into its universe, rather than just borrowing ideas from The Lord of the Rings. And even less-enthused observers have to admit that Morrowind has probably had the greatest overall influence on the direction of Western RPG output since Ultima IV — near-as-dammit every WRPG since has been influenced by Morrowind.

Morrowind also features a large modding community which continues to churn out Game Mods to this day. One of the most prominent is Tamriel Rebuilt, which seeks to add a lore-accurate representation of the rest of mainland Morrowind to the game's world. (Tropes specific to Tamriel Rebuilt should go there.)

Come Nerevar. Friend or Troper. Come and look upon the main page and the tropes.