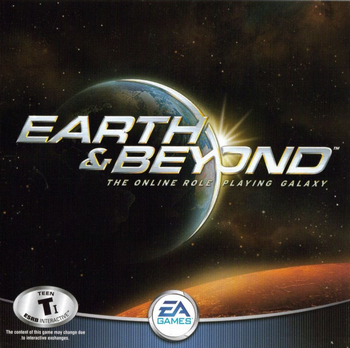 Earth & Beyond was an MMO developed by Westwood Studios and published by Electronic Arts that was released in 2002.
Advertisement:

The backstory goes like this: At some unspecified point in the future, humanity has spread into space. Over time, three distinct cultures develop:

As one can probably guess, things weren't bound to stay peaceful. The Jenquai stumble over an ancient artifact: a jumpgate. The Jenquai, worried over what the other two races would do with it, keep it secret. It doesn't last, and a spy from the Terran Megacorp InfintiCorp leaks the information, sparking the Gate War.

Nine years of war later, a truce is declared and the three races agree to share the gate. Shortly after that, InfintiCorp unveils its "InfinitiGate", a reverse-engineered version of the ancient gate. The game itself picks up fifty years later, when things have started getting interesting.

Sadly, the game was shut down on September 22, 2004, after a comparatively very short run; it was this failure, along with that of Command & Conquer: Renegades, that would ultimately doom Westwood and lead into its absorption into EA Los Angeles and the eventual departure of every single Westwooder from EA. That said, diehard fans of the game continued to do their best to revive the game via the Earth and Beyond Emulator, including classes that were dummied out prior to the game's launch, and the game's server and client can now be emulated for the curious.

See also EVE Online, which launched around the same time (and was commonly perceived as the game's primary rival) but lasted much, much longer.

Tropes appearing in Earth and Beyond include: