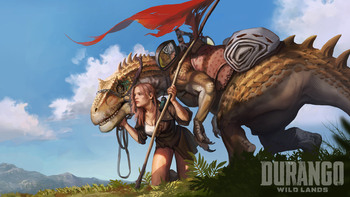 You begin your journey on a train that is abruptly derailed by a massive rift in time and space. You wake to find yourself on an island populated by dinosaurs and other extinct fauna, along with other survivors from various different time periods. You will have to learn how to hunt, cook, craft, and fight if you want to survive Durango, a land of ever-shifting islands.

The game features a massively customizable skill tree. New players select a Backstory which gives them a boost in one category or another - for example, a homemaker has an advantage to cooking skills; a farmer to cultivation - but players can specialize in any areas they choose.

You will earn skill points naturally as you explore the islands that make up Durango. Islands come in different types: 'Tamed' and 'Civilized' islands are stable, and you can make your home (called your Domain) there, while 'Unstable' islands appear and disappear at random. Unstable archipelagos are made up of whole strings of unstable islands.

Along the way, you will make contact with various shadowy organizations trying to influence the future of Durango, who want you to carry out various tasks for them. Some want to find a way to restore humanity's technical prowess, while others want to preserve the land as it is. Some just want to focus on rescuing as many survivors as possible.

Player cooperation is encouraged. A downed player can request rescue from others in exchange for a small reward, and players can form temporary parties to take down larger creatures. Sending a smiley emoji through the chat system will give a temporary boost to other players' stats. Player Versus Player opportunities do exist, but are restricted to specific high-level islands.

On October 16, 2019, the creators announced that development of the game would be terminated following a wrap-up period designed to bring the various story elements to a satisfying conclusion.

Tropes Featured In This Work: