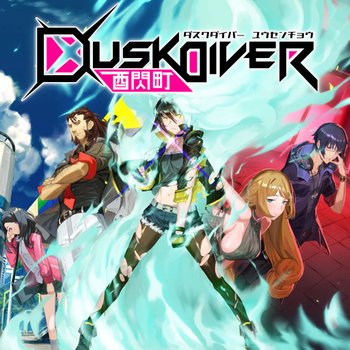 Left-to-Right:Yusha, Leo, Yumo, Le Viada, and Bahut
It's a normal day for Ordinary High-School Student Yumo and her friend Yusha, going out to eat at the restaurants in Ximending, Taiwan. After the two get lost, however, they find themselves plunged into a Dark World version of the city, fighting off Chaos Beasts, and trying to keep the boundaries between them from fraying and plunging both into total anarchy...
Advertisement:

Dusk Diver (酉閃町) is a 3D, third-person Beat 'em Up developed and published by JFI Games and Jera, and released on PC through Steam Early Access on 26th March, 2019, with a Nintendo Switch version following a few months later. Gameplay is fast, frenetic, and combo-heavy, reminiscent of other anime-inspired titles like the Senran Kagura and Honkai Impact 3 RD, the focus on NPC partners and combination attacks especially.

A sequel, Dusk Diver 2, was released on February 24, 2022, this time developed by the rebranded WANIN International and published by Justdan International for PC, Playstation 4, and Nintendo Switch. It takes place a year after the original game, with Yumo and Yusha now in college, dealing with both another reality tearing threat and Yumo's body suffering painful, almost debilitating episodes of pain and weakness a side-effect of trying to separate the Guardian's supernatural powers from her.