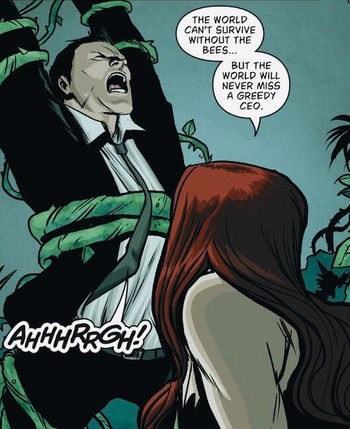 Owen Ayers, former officer in the Navy... This guy's a war hero. Medical discharge in 2011 after participating in Operation Tomodachi. The U.S.military relief effort at Fukushima. Flew into an unscheduled emergency venting of radioactive gas. He and several members of his crew got radiation poisoning. He was the victim of a nuclear meltdown, so now he wants to cause one.
— FBI profile on Owen Ayers aka Gaia, The Blacklist
Advertisement:

A person who uses violence and terror to try to save the planet from ecological catastrophe, the Eco-Terrorist is generally a Mad Scientist (especially the Evilutionary Biologist), a Well-Intentioned Extremist (with an emphasis on extreme) or a Knight Templar. The milder versions, being well-intentioned, may try to avoid harming people, and will confine themselves to actions like blowing up polluting factories in the middle of the night, and things like that. More extreme ones will have no hesitation to kill those they deem responsible — directly or indirectly — for harming the planet. And the most extreme of all will see humans as a blight on the planet, and think the only way forward is to eliminate the species.

Most Eco-terrorists will view themselves as a sort of human incarnation of Gaia's Vengeance. In works with Grey-and-Gray Morality, they will often be fighting Toxic, Inc., who may even try to frame them with a False Flag Operation.

Larger organizations may have a more international scope than most other flavors of terrorist — an eco-terrorist group might well have both Western and Far East Asian Terrorists and other Evilutionary Biologists working side-by-side.

Very closely related to the Animal Wrongs Group, but with a much broader scope of interest, which includes not just animals, but also plants, habitats, and, well, the entire ecosystem. May overlap with Evil Luddite if they believe that technology is the biggest threat to the environment. See also Overpopulation Crisis, which egregiously extreme eco-terrorists are frequently deeply concerned with preventing.