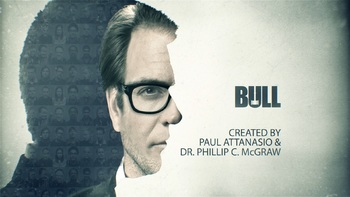 'He'll get you off.' Seriously. This is the tagline they're going with.
"I'm Dr. Jason Bull. I'm not a lawyer. I'm an expert in what's called trial science. I study the jury's behavioral patterns. I know what they're thinking before they do. Everything my team learns gets plugged into a matrix, which allows us to assemble a mirror jury that is scary in its predictive efficiency. The verdict you get depends on me. And that's no bull."
— Dr. Jason Bull's voiceover introduction to the show
Advertisement:

Bull is a 2016 Law Procedural created by Phil McGraw that first aired on CBS on September 20, 2016. The show is based on Dr. Phil's early career as a trial consultant.

Michael Weatherly stars as Dr. Jason Bull, a brilliant psychologist who uses his intimate knowledge of human behavior to better understand what motivates a jury to decide the guilt or innocence of someone on trial. Together with his team at Trial Analysis Corporation, Bull uses the science of human behavior and interaction to help his clients prove their innocence in court.

The fifth season is currently airing.

Not to be confused with the 2000 TNT Wall Street drama of the same name.