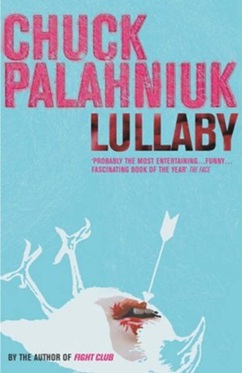 Lullaby is a 2002 novel by Chuck Palahniuk.

Carl Streator is your run-of-the-mill reporter, if a bit passive-aggressive. When assigned to a story concerning several recent cases of babies suddenly dying, he seems to find a pattern in every house: the book Poems and Rhymes Around the World, turned to page 27. Upon further inspection, he finds that all of the children have been read something called a culling song...

When he finds himself unconsciously using the song to kill people, Carl realizes he needs to find all copies of the poem and destroy them. As he investigates, he comes across a strange realtor, Helen Hoover Boyle, who seems to know something about the song. Along with her nature-loving Wiccan secretary, Mona and her eco-terrorist boyfriend, Oyster, the two go on a quest to destroy the culling song and its source, the Grimoire.