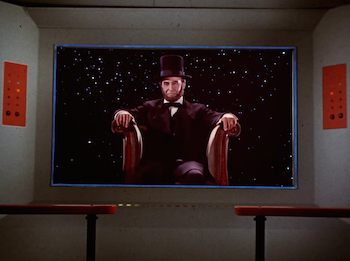 The One With… Abraham Lincoln IN SPACE!

Another day on the Enterprise, another new planet to explore. Excalbia will be explored from afar due to excessive amounts of volcanic activity. Kirk asks Spock if he detects any life forms. He actually detects a few, though there should be none. Oh well, obviously a computer error. Time to pack it in and call it a....is that Abraham Lincoln hovering in space?note We are not making this up, okay?

He's posed just like his statue in the Lincoln Memorial, armchair and all. Somehow, he can not only exist in space but speak in the vacuum of space. He politely requests to be beamed aboard. Kirk beams him aboard with full presidential honors. He realizes there is no logical way this should be the Great Emancipator himself, but he'll play along anyway. Lincoln, still charmingly polite, requests Kirk and Spock to beam down to Excalbia with him. He cannot explain why, only that they must. Bones and Scotty think this is a very dumb idea. So of course Kirk's willing to do it! Spock declares he will accept the invitation too. And so they do.

On beaming down, they meet Surak, a Messianic Archetype from Vulcan history who makes Spock look like a Keet. They also meet a Rock Monster called Yarnek who wants to know if Good or Evil is stronger. To find out, he becomes Teddy Long and makes an 8 person Tag team match, pitting Kirk, Spock, Lincoln and Surak against Genghis Khan, Zora (a Mad Doctor from Tiburon), Colonel Phillip Green (Eco-terrorist and genocidal maniac from World War III) and Kahless the Unforgettable (Hero of the Klingons). Why? Eh, why not?