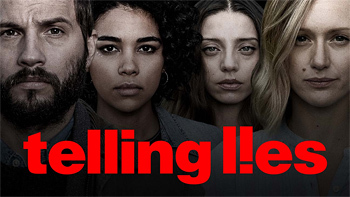 "You lie to people, and they believe you."
Advertisement:

You have obtained a hard-drive from the National Security Agency that contains hundreds of videos of calls and recordings taken on the phones of four individuals over the course of two years. You must search through the database to figure out why the four central characters have been the subject of electronic surveillance, as well as the nature of the player-character's role in these events. However, each video you uncover only contains one side of a conversation, requiring the player to find the complementary video to fully understand the conversation.

Telling Lies is the Spiritual Successor to Sam Barlow's previous game Her Story, with a similar presentation and highly similar gameplay. It also expanded the scale - while Her Story has just under two hours worth of video to watch, Telling Lies has about 10. Additionally, Telling Lies has a diverse range of filming locations and stars a wide cast of actors, whereas Her Story was restricted to one location and only had one actor.

As a large part of this game involves figuring out what's going on and who the characters are, details as small as a character's name can damage the experience, as such there will be unmarked heavy spoilers below; read at your own risk.