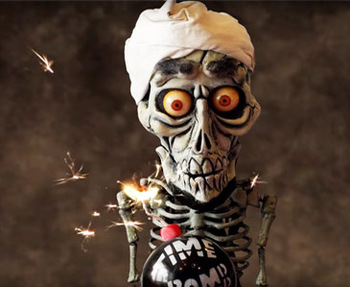 Let's hope he gets it right this time, 'kay?
Advertisement:

Terrorism is defined by The Other Wiki as "the use of violence, or threatened use of violence, in order to achieve a political, religious, or ideological aim". Some things associated with terrorism include murders, bombings, shootings, hostage-taking, and other threats. There are numerous real-world terrorist groups that make an appearance in fiction and countless fictional ones. They are usually portrayed as villainous.

While terrorism has appeared in fiction for years, the 9/11 attacks made terrorists, specifically the Islamic Fundamentalist type, as the main villains in Hollywood movies, replacing the Dirty Communists of the Cold War.

Compare Rebel Tropes, The Only Righteous Index of Fanatics!, and Organized Crime Tropes for another kind of terrorists.