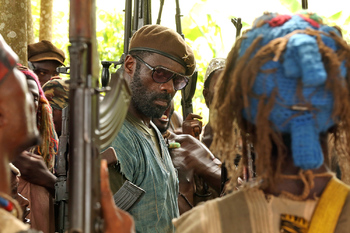 African Terrorists are militia groups from Sub-Saharan Africa who primarily operate around their home countries, carrying out guerrilla warfare against domestic and foreign governments, and frequently being involved in the drug trade. Like all terrorist organizations, they have been known to commit serious atrocities and war crimes, and are frequently shown to be forcibly recruiting underage minors to fight for them.

They will often be serving as mooks to a wealthier, lighter-skinned criminal organization, typically Western or from the former Communist Bloc. Similar to their Middle Eastern counterparts, they are usually equipped with surplus Warsaw Pact firearms, supplied by the USSR and China during the Cold War (usually to the Communist revolutionaries in Angola and Mozambique) or bought from other warlords.

While Truth in Television, this subject is very volatile in nature, so No Real Life Examples, Please!