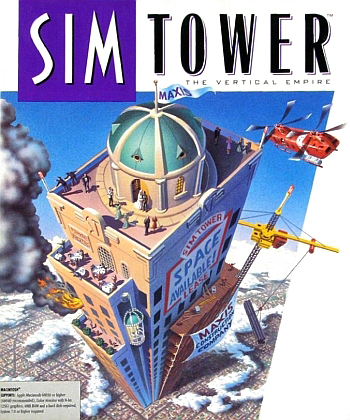 SimTower: The Vertical Empire is Maxis' 1994 simulation game American adaptation of Yoot's Tower, whose gameplay is Exactly What It Says on the Tin. The player is put in the role of an owner and chief executive of a massive urban development project in an unnamed city, going through five stages of gameplay, in order to achieve the coveted title of Tower. These stages are:

Confusingly, Tower was re-released for iOS devices, but since Electronic Arts owns the "Sim" name, it was named Yoot Tower, which was the name of The Tower II. It was also ported to Android with the name Droid Towers. SimTower was not released for DOS and is only playable on Windows 3.1.