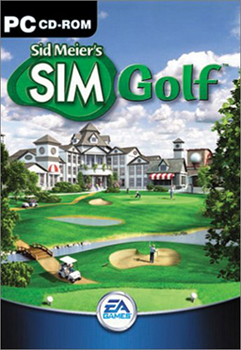 Sid Meier's SimGolf is a Simulation Game made by Sid Meier, Firaxis Games, and Maxis, released to Windows on January 23rd, 2002 by Electronic Arts. You play as a professional golfer who owns a small patch of land that has been declared as a golf club. One part of your goal is to build a lucrative golf club, expanding your lands and designing golf holes while providing excellent services to your customers with buildings and refreshments. You earn simoleons from members of your golf club as they complete each hole, buy refreshments, or use any of your buildings. You then spend said cash to designing your holes, providing buildings and staff, and paying your employees.

The other part is, well, being a professional golfer. Challenge the players in your golf club and accept challenges from pros, with the holes you designed as the golf course. You earn money with each winning shot. Eventually, you'll be asked to host a tournament! Failure to make your guests happy causes them to eventually leave your club or cause tantrums (which then makes other golfers unhappy), whereas failing to win in a golf game makes you lose cash!

It is an addictive game that pretty much captures the player much like other Maxis sim games. And speaking of which, it takes cues from The Sims, having a similar language, and even a mode where notable characters from said game acts as patrons of your club.

Not related to another game named SimGolf made by Maxis.

a game which is released on Steam and GOG, is essentially a futuristic Spiritual Successor of this game.