It's All Upstairs from Here 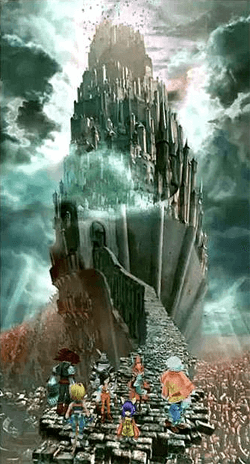 The whole dungeon is a massive set of staircases.
Dr. Raymond Stantz: Hey. Where do these stairs go?
Dr. Peter Venkman: They go up.
— Ghostbusters (1984)
Advertisement:

A trope found in most fantasy setting Role Playing Games. No matter what all you will have to accomplish between the beginning and the end—whatever continents you must cross, whatever oceans you must ford, whatever planets you must visit—you will always have to climb a Tower.

True, towers make for great defenses in times of war. However, one can easily see that the reason it exists is solely to make the player traverse not only far, but up in order to accomplish the goal. More often than not, the tower will either be three-quarters of the way through the game or will consist of The Very Definitely Final Dungeon itself. If the tower is not the final dungeon, then you can guarantee that when you finally do reach the top and fight the boss you're in for some pretty dialogue-heavy plot sections usually involving some kind of twist that changes the direction of the protagonist's mission.

This trope is not just limited solely to Role Playing Games; very often games will utilize this type of level design as a way to show off their environments, particularly open-world games where it is one of the few times you can see said world from such altitudes. Games with climbing mechanics will typically have you spiraling around the outside of the tower.

Clock Tower is a closely related trope, especially in a Bell Tower or Cathedral. Oddly, you rarely see residents having to climb a Mage Tower, perhaps because it would highlight how impractical it is for old men. In case the tower or building is high enough to take the characters to the high skies (thus being a literal skyscrapper), they'll transition into Journey to the Sky.

A sandy tower with tornadoes that send Mario up and a star at the top.

A sandy tower with tornadoes that send Mario up and a star at the top.