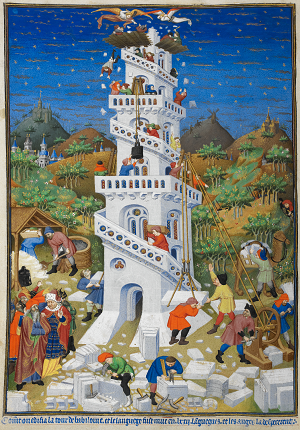 The Tower of Babel (Hebrew: מגדל בבל‎ Migdal Bavel Arabic: برج بابل‎ Burj Babil), according to the Book of Genesis, was an enormous tower built in the plain of Shinar, a tower so tall it offended God.

According to the biblical account, a united humanity of the generations following the Great Flood, speaking a single language and migrating from the east, came to the land of Shinar, where they resolved to build a city with a tower "with its top in the heavens...lest we be scattered abroad upon the face of the Earth." God came down to see what they did and said: "They are one people and have one language, and nothing will be withholden from them which they purpose to do." So God said, "Come, let us go down and confound their speech." And so God scattered them upon the face of the Earth, and confused their languages, and they left off building the city, which was called Babel "because God there confounded the language of all the Earth."(Genesis 11:5-8).

The Tower of Babel has often been associated with known structures, notably the Etemenanki, a ziggurat dedicated to Marduk by Nabopolassar (c. 610 BC). The Great Ziggurat of Babylon base was square (not round) and it was 91 metres (300 ft) in height, but it was demolished by Alexander the Great before his death in an attempt to rebuild it. A Sumerian story with some similar elements is preserved in Enmerkar and the Lord of Aratta.

This page is for allusions and references to the legend; for the trope about ominously imposing skyscrapers in general, see The Tower. See also Curse of Babel for the language mix-up, Language Barrier for the Real Life version, and Space Elevator for the Sci-Fi version. As to whether the successful completion of one will lead to God confounding our tongues even more, stay tuned! Compare with Yggdrasil, The World Tree of Norse Mythology that has a similar height. Sub-Trope of Journey to the Sky.