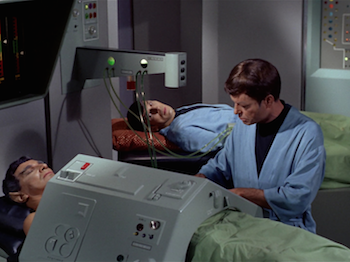 Everyone's getting all primped up to greet the ambassadors whom the Enterprise is delivering to the planet code named Babel for an important Federation conference. The arrival of Vulcan Ambassador Sarek and his Terran (i.e., human) wife Amanda is particularly looked forward to. The awaited arrival comes with a shocking surprise. Sarek and Amanda are Spock's parents!

Spock has been estranged from his parents for awhile. Spock and Sarek haven't spoken as father and son in 18 years due to Sarek not approving of Spock going into Starfleet rather than the Vulcan science academy. And Amanda just wants him to smile, dammit! But, Spock has no time or desire for lovey-dovey family reunions. Things are tense with all the delegates on board, many with personal grudges against each other. And just to make matters worse, an unidentified vessel is stalking the Enterprise. And just to put the cherry on the crap sundae, Sarek is not only accused of murder, but he has a heart attack just as soon as the charges are made against him!

Then Kirk gets stabbed in the back by Thelev of the Andorian party. Spock is told that only his blood could save his ailing father, but with Kirk indisposed, the Enterprise needs a commanding officer, particularly with that alien vessel closing in.

What's a Vulcan to do?