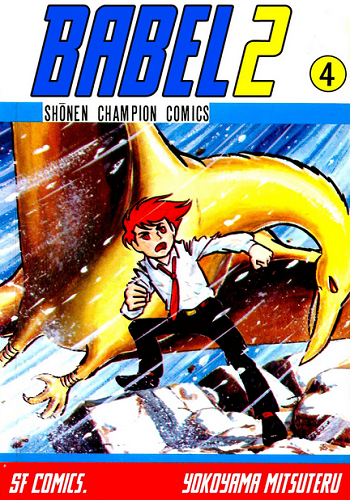 Babel II (Babiru Ni-Sei, in some countries Babil Junior) is a manga created by Mitsuteru Yokoyama (of Gigantor and Giant Robo fame). The manga was published in Weekly Shōnen Champion from 1971-1973. An anime adaptation was produced by Toei Animation in 1973, followed years later by two remakes. One is a 4-episode OVA produced by JC Staff in 1992. The other is a 13-episode TV series produced by Vega Entertainment in 2001.
Advertisement:

It follows the story of Koichi, a teenager who discovers to be a descendant of Babel I, an alien who fell on earth 5000 years ago, and who tried to build the eponymous tower as a way to make easier to send in the space a request for help, failing spectacularly. Nonetheless, Babel I decided to mate with humans and to leave his futuristic technology, hidden in the ruins of the tower, to the first of his descendants who manifested his same powers. And the first one was indeed Koichi... or maybe not.