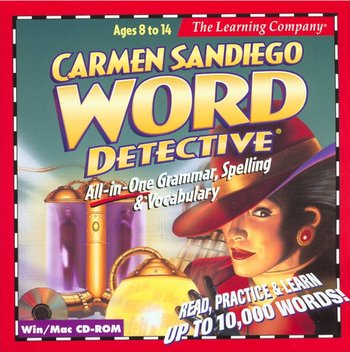 Not pictured: VILE agents inches from your face.
An Edutainment Game made in 1997 as part of the Carmen Sandiego franchise by Brøderbund Software and featuring the titular villain in a scheme to cause a worldwide communications breakdown using her "Babble-On Machine".
Advertisement:

The story opens with the latest agent in a line of failed missions being captured by one of Carmen's surprise traps. This leads the chief and ACME agent Chase Devineaux to turn to the player character, dubbed Agent 13, to rescue the captured agents and destroy the machine. The gameplay centers around locating the keys to the agent's cells using "password decoders", in the form of various language puzzles hidden in various VILE hideouts around the world (and even beyond).