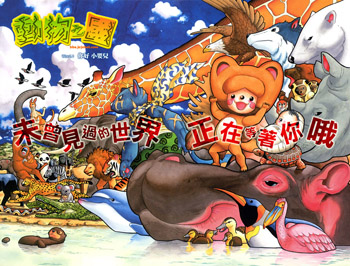 The jungle can be a hard place to live, and is no such place for a baby but Monoko (a tanuki) cannot bear to leave this helpless thing alone, and so takes it in. With the help of the whole tanuki village, they survive the harsh winter while trying to avoid the predators that surround them, even befriending some of them.

It soon evolves into the baby trying to discover what happened to humanity, and how he can make new discoveries that might get the herbivores and carnivores to coexist.

Think Animal Farm meets Tarzan, with a touch of Rugrats thrown in for flavor.

Written and drawn by Makoto Raiku of Zatch Bell! fame, the manga was serialized in Bessatsu Shonen Magazine from 2009 to 2014 and compiled into 14 volumes. The manga is licensed in English by Kodansha USA.