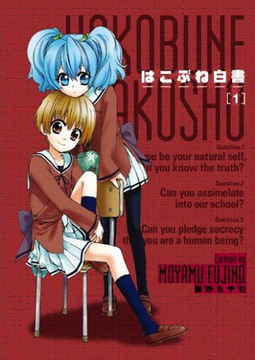 "Can you pledge secrecy when you are... a human being?"

Neko Fukuta, nicknamed "Fune", just can't seem to get into a high school. However, her prayers are answered when the mysterious Morimori High School accepts her application. Unfortunately, when Neko applied, she didn't realize Morimori isn't a school for humans. Instead, it is a high school for magical animals to attend in order to learn how to be human and live among them disguised as such. With no other options, Neko persuades the headmaster to let her in, under one condition: she must not reveal to the others that she is human.

It is written by Moyamu Fujino and complete at seven volumes.