Stranger in a Strange School 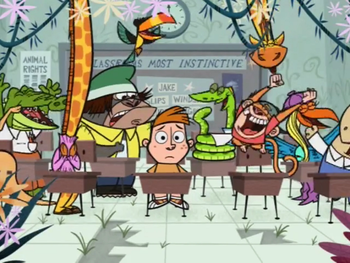 By mistake or some odd chain of events, an Ordinary High-School Student winds up attending an Extranormal Institute. Perhaps they're a human in an All-Ghouls School, or a muggle in a Wizarding School, but whichever it is, they clearly don't fit in. If the masquerade is in full effect, they'll probably have to try to blend in with the usual type of student, with the consequence of failure ranging from Laser-Guided Amnesia to Cruel and Unusual Death to uphold the masquerade.

Acts as a Naïve Newcomer. After sufficient experience, they may upgrade to something that does fit in. Often a New Transfer Student.