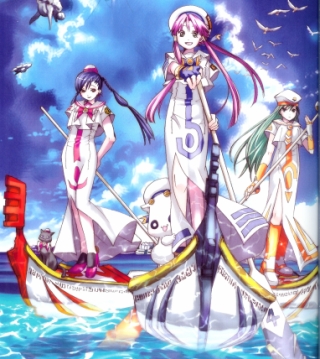 ARIA is a manga and anime series set in the 24th century, depicting the adventures of several young women who live on Aqua, the planet formerly known as Mars before it was terraformed into a water-covered paradise. They serve as gondolier tour-guides—or Undines—in the city of Neo Venezia, which is an exact copy of Earth's Venice, canals and all.

The story focuses on Aria Company, the smallest gondolier tour business in the city with only two employees. It is run by Alicia Florence, who one day welcomes a new apprentice called Akari Mizunashi. Most of the plot deals with the relationship between the two girls and Akari's efforts to become a Prima, the highest rank of Undine, signified by being allowed to steer a gondola without wearing gloves. Akari also befriends and trains with apprentice Undines from other companies, who each get their own screen time as the series progresses.

Akari writes extensive letters describing her experiences to someone on Earth (who is referred to as Manhome as a Shout-Out to the works of cult Speculative Fiction writer Cordwainer Smith). Eventually, however, it is revealed in the manga to be the readers of her blog, while in the anime it is Ai, a young girl who was a customer in the first episode.

The manga series is written by Amano Kozue and started out with the title Aqua, but was renamed Aria when the series switched publishers from Enix's Stencil to Mag Garden's Comic Blade. Both were later adapted into an anime series with three parts, chronologically titled The Animation, The Natural and The Origination, plus a stand-alone OVA called Arietta. The pacing is generally relaxed and easy-going, with lots of attention for the beautiful scenery of Aqua and Neo Venezia.

Most of the drama consists of friendly disputes between the various apprentice Undines as they learn their trade. Akari also has a talent for surreal encounters, which pushes the story into a fantasy setting at times. The later seasons and the OVA have a tendency to become somewhat melancholic from time to time, but generally the tone of the show is light and warm.

For people who like lovely imagery of beautiful girls against a wondrous backdrop, this Slice of Life series is a nice change of pace from the action-filled and fanservicy fare of most other anime. For this reason (and others), it's often compared to another Slice-of-Life work, Yokohama Kaidashi Kikou.

Has nothing at all to do with Aria the Scarlet Ammo, and especially not AKIRA.

In a move that caught many in the fandom by surprise, a trio of OVAs were announced, to celebrate the 10th anniversary of the franchise. Entitled ARIA the Avvenire, they tell of the new adventures of a new generation of Undine, with Akari and her friends now passing on their knowledge as well as love for Neo Venezia. The OVAs were included in the Blu-Ray rereleases of the three original seasons. As part of the anniversary celebrations, a Rhythm Game of all things called ARIA Aqua Ritmo was released on January 2016. The game features all Avvenire characters and the original series' soundtrack and makes use of the Live2D engine.

2020 saw to an announcement of a new ARIA animation for its 15th anniversary for the Winter 2021 season. Athena's original seiyuu, Tomoko Kawakami, is set to be replaced by Rina Sato.