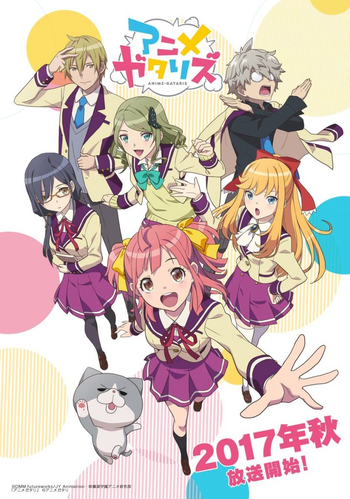 An Anime First project of WaoWorld studios, airing in the Fall 2017 anime season for 12 episodes.

The name translates as 'talking about anime'.

Anime-Gataris centers on Minoa Asagaya, a new high school student in Sakaneko Private High School. Despite being a novice to anime, Minoa's classmate Arisu Kamiigusa invites her to an "anime research club" at school, to help her re-discover an obscure anime that she loved in her past. Through conversations with various anime-loving classmates and upperclassmen, Minoa gradually gets hooked on anime. While they stand against the student council's continuous efforts to disband their club, as well as other shady happenings hiding in the background, they talk about anime, whether in Akiba, or in real-life "sacred place" anime settings, or the hot springs.

The series is actually a prequel to a short 6-episode anime that only played in one Shinjuku theater called Anime Gatari. Erika and Maaya were in this original as members of a college anime club.