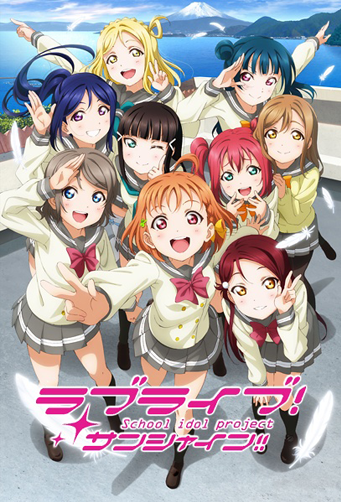 The anime follows the adventures of Aqours, the school idol group of Uranohoshi Girls' School. Chika Takami, a student in Uranohoshi and resident in the seaside neighborhood of Uchiura in Numazu city, Shizuoka prefecture, decides to start her own idol group along with her friend You Watanabe, inspired by the school idols of µ's. However, much like with Honoka Kousaka and her own group, things won't go so easily, but as long as they don't give up, their dream just might come true.

It began airing on July 2, 2016 in the Summer 2016 Anime schedule, licensed by Funimation, and was also dubbed as a part of Funimation's Summer Broadcast Dub line-up. A second season aired from October 7, 2017 as part of the Fall 2017 Anime lineup. Much like its big sister, a movie titled Love Live! Sunshine!! The School Idol Movie Over the Rainbow has been produced, premiering on January 4, 2019 in Japanese theaters.