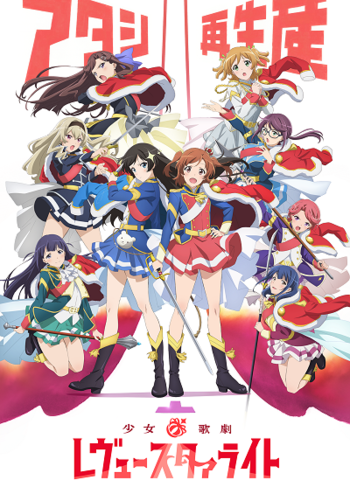 "And it shall be bestowed upon you, the Star which you have longed for —"

When they were children, Karen Aijo and Hikari Kagura made a promise with each other that they would one day stand on the stage of Starlight, a theatrical production famed all over the world. However, Hikari transferred schools and moved to England. Time passes, and now the girls are 16 years old. As a student at Seisho Music Academy, Karen is very enthusiastic about the lessons she takes every day, holding the promise she made with Hikari close to her heart. But as the cogs of fate turn, the two girls are brought together once again. The girls and their classmates will compete in a mysterious audition process to become the "Top Star".

Shoujo☆Kageki Revue Starlight is a Japanese multimedia franchise created by Bushiroad, featuring two stage musicals, an anime, three manga series, and a mobile game. The musical first premiered in September 2017, with a second run in January 2018. A second musical premiered in October 2018 and is set for another run in July 2019. Produced by Kinema Citrus, the anime began airing in July 2018.

A mobile game titled Shoujo Kageki Revue Starlight -Re LIVE- was released in Japan on October 22nd 2018, while the global version was released on April 22nd, 2019. Shoujo☆Conte All Starlight, a series of animated shorts, premiered in July 2019. Episodes are first made available to -Re LIVE- players within the game app, then uploaded to the official YouTube channel

and are free to view for 2 weeks.

Two movies have been announced. The first movie: Shoujo☆Kageki Revue Starlight Rondo・Rondo・Rondo, which was released in Japanese theaters on August 7, 2020, is a feature-length recap of the anime's events told in Nana's perspective with brand new scenes not shown in the original TV series. The second movie features a brand new story set during the 99th's third year in school and premiered in Japanese theaters on June 4th, 2021 after a delay from its original date of May 21st due to COVID-19 concerns. The Blu-ray of the movie released in December later that same year.

The viewer will soon learn that Fury, Curse, Escape, Jealousy, Despair, and Arrogance are the goddesses played respectively by Junna, Futaba, Kaoruko, Mahiru, Nana, and Karen in last year's performance. With the exception of Pride/Arrogance (since over the course of the anime Karen's more closely associated with Flora) the current and former identities of the goddesses are suspiciously apropos for the characters who portrayed them.