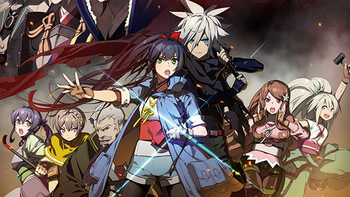 It was originally announced in 2003 as a collaboration between Studio Gainax, Takara, and Brocolli, and was planned to air as a television anime movie in 2005. However, it was put on indefinite hiatus after the project's staff members left one after another. One decade later, the project was announced to have revived, with Bushiroad president, Takaaki Kidani, credited as the original concept creator and executive producer, and the late novelist, Sunao Yoshida, still credited as the original story creator. The main mecha design is handled by nitro+, who previously designed Demonbane, while the animation is produced by Kinema Citrus and Orangenote with further assistance from regular Kinema Citrus subcontractor T2 Studio.

In a time when the world is in the pits of despair after being ravaged by a poison called "Shinobi" that came to Earth via an asteroid, the people ran away to a place called "Kairiku," that used to be at the bottom of the ocean, so as to try and protect themselves against the effects of the poison. In such a world, there was but a single light of hope: the "Holy Weapon Giga Road" and the legendary warrior "Yagyu" are needed in order to counter the effects of the poison.

In order to save the world, Ame, princess of a fallen nation, stands up.