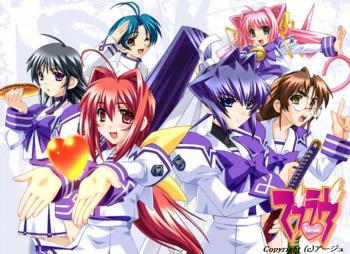 Save in the Name of True Love.
Advertisement:

Muv-Luv Extra is the first of the trilogy encompassing the Muv-Luv visual novels. It tells the story of an average high school student named Shirogane Takeru and his childhood friend Sumika. At the very beginning of the story, Takeru wakes up to find a ridiculously wealthy girl named Meiya sitting next to him in bed, at which point Sumika walks in to wake him up like always. She doesn't take it well. The love triangle between these two then proceeds forward and completing both routes is required to unlock Muv-Luv Unlimited, though the official international release drops this requirement and makes both Extra and Unlimited playable from the outset. In addition to the main heroines, there are three other heroine routes and two bad ends focusing on the teacher character and Takeru's friend Mikoto.

Extra is largely written as an Origin Story and thus contains a great deal of foreshadowing. We are introduced to Takeru, the girls he knows, Mikoto and Takeru's two teachers, Yuuko and Marimo. Since the story is written primarily to establish Takeru as your standard dense harem protagonist, it wildly embraces every harem cliche it can find so as to contrast more with the latter portions of the story. Hidden beneath the childhood friends and wacky hijinks are a surprising amount of little details that do not become relevant until far later in the story as a whole.

to fund an official English localization of Extra and it's sequels Muv-Luv Unlimited and Muv-Luv Alternative. Within less than a day, âge achieved their funding goal of $US 250,000. The campaign concluded on November 4th, 2015, having exceeded the target amount by more than $US 1,000,000. The English version was released on Steam on July 15th 2016.

See Muv-Luv for the other works in the series. The story continues in Muv-Luv Unlimited.