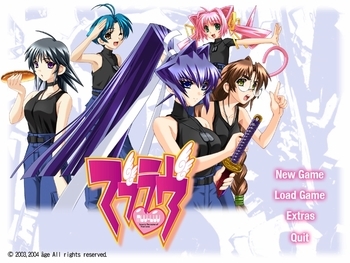 Muv-Luv Unlimited
Even if your own life is what's most important to you, you can't protect it alone.
Advertisement:

Muv-Luv Unlimited is the second of the Muv-Luv Visual Novel trilogy and follows where Muv-Luv Extra left off. One day, Takeru wakes up to find that his entire home town is in ruins. In place of his neighbor's house is a crashed Humongous Mecha. Naturally, Takeru begins to have spasms of nerdy joy at seeing real mecha. Since you can only appreciate a destroyed mecha for so long, eventually he begins wandering around the rubble and eventually decides to head up to the school, which looks a little different today. As in, it has become a military base with guards and a massive antenna. Lacking proper authorization or a reasonable excuse for what he is doing in this town, he is quickly arrested and thrown into the military prison until the head scientist comes to visit. Said head scientist is none other than Yuuko, the stranger of his two teachers.

However, all is not well quite so easily. Yuuko clearly does not have any idea who Takeru is, and after a brief conversation, it is established that Takeru is not in the world he knows any longer. Instead, he has been dropped into an apocalyptic warzone where over three-quarters of humanity has been wiped out by the mysterious aliens known only as the BETA. Lacking any other ways to get by or go home, Takeru is more or less conscripted and to his delight will be entering the training program to pilot the mechas. On top of that, he is given a strangely high access to the base's inner workings. As he joins his new training squad, he is shocked to see that they are all familiar faces. They are, in fact, all of his love interests from '"Extra'' as well as Mikoto, who is now definitely a girl. Just like Yuuko, they are alternate versions of the people he knows, and thus they do not recognize him. Strangely, though, Sumika is not there. In fact, no one there has even heard of her. Unfortunately, Takeru has little time to deal with this, as compared to actual soldiers he is dreadfully unprepared.

Unlimited is generally viewed as the point in the Visual Novel franchise when the series begins to get interesting. Not only does it show us how a typical harem protagonist fares in a warzone, it also shows what the other characters can be when placed into a different situation and how everyone is forced to mature. Plot threads are established for the most highly acclaimed part of the series Muv-Luv Alternative which, like similar threads from Muv-Luv Extra will take some time to bear fruit.

Has a continuation of its timeline in the Visual Novel series Muv-Luv Unlimited: The Day After.

to fund an official English localization of Unlimited, Muv-Luv Extra and Muv-Luv Alternative. Within less than a day, âge achieved their funding goal of $US 250,000. The campaign concluded on November 4th, 2015, having exceeded the target amount by more than $US 1,000,000.