The characters of Muv-Luv Extra, with later additions from Muv-Luv Altered Fable.

The protagonist of Muv-Luv Extra, Unlimited, and Alternative, he also happens to be good looking and a nice guy, so he ends up fairly popular with girls. Not that he ever notices.

Sumika is Takeru's childhood friend. She's very obviously in love with him from the start, but since he's dense he has yet to catch on. Sumika and Takeru tend to have a fairly abusive friendship. 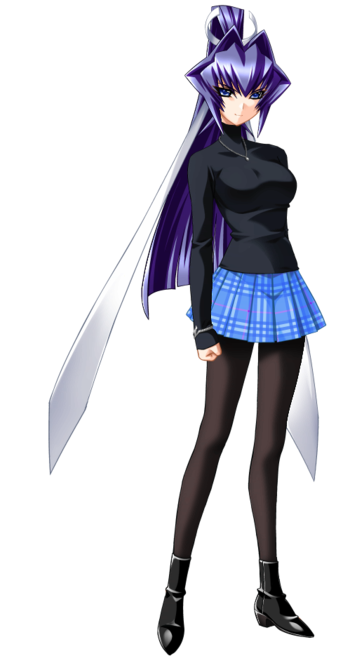 A strange girl who simply moves in one day, Meiya is the heir of the Mitsurugi Group. She is highly talented at essentially anything she does, but appears rather socially clueless. For reasons unknown to Takeru, she has apparently decided she is going to marry him.

Miki is a small, friendly girl in Takeru's class. She gets along well with others, but gets nervous easily and dislikes confrontation. She bears a strong resemblance to a cat, so Takeru usually calls her Tama based both on her family name and a common cat name in Japan.

A strong but weird girl in Takeru's class, Ayamine seems to enjoy messing with others. She tends to be very unemotive and butts heads with Sakaki frequently due to their clashing personalities.

Takeru's only apparent male friend, Mikoto is as much of a fan of the arcade game Valgern-On as Takeru. He looks quite girly and rarely pays much attention to others.

Sakaki is the class representative of Takeru's class. She's very fussy and a stickler for rules, though she's also surprisingly competitive. She tends to get into fights with Ayamine due to their similar personalities.

She is best friends with Akane Suzumiya, the class representative of 3-D.

"When you get to the point where you can laugh at your mistakes, you'll find new things to replace what you lost."

Takeru and company's homeroom teacher in Extra, who has difficulty holding onto her boyfriends, something for which she is endlessly teased by her old friend and fellow teacher Yuuko.

Marimo's best friend as well as a surprisingly renowned physicist, Yuuko is a genius and a nutcase. Occasionally, she interrupts her class to start lecturing about her work, which none of the class has the slightest chance of understanding.

Servants of the Mitsurugi Group

Tsukuyomi is Meiya's personal attendant and highly qualified at a number of tasks. She's quite devoted to Meiya and seems to act like a big sister. Normally, she acts quite refined and friendly, but when irritated she'll begin to speak quite crassly, hinting that she might really be fairly violent.

Meiya's maids under the supervision of Mana. Known as the "Three Idiots", they tend to make numerous mistakes, blame others for those mistakes and then insult them.

Originally a heroine from Rumbling Hearts, Akane is the Class Representative of Class 3-D, a talented swimmer and the best friend of Chizuru, with whom she has a friendly rivalry.

Sagiri is a talented local doctor, only seen in Ayamine's route. He used to board with the Ayamine family until one day he made a mistake at the hospital and Ayamine's mother took the blame for the error, resulting in the loss of her job. He and Ayamine used to have a sort of relationship, but he ended up marrying the hospital director's daughter in order to improve his career. In Ayamine's route, he claims he is willing to give it up in order to be with her.

Side characters and family