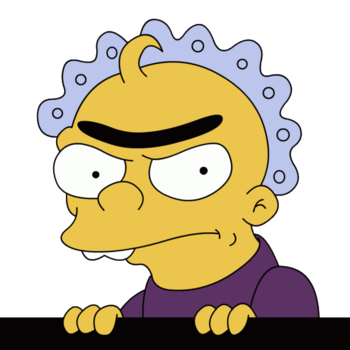 That baby is plotting something.
"...Ganondorf has an exceptionally unique case of unibrow, in which his eyebrows connect clearly with his hair, thus forming one very long eyebrow. This puts the typical unibrow (one that connects in the middle of one's face above the nose) to shame..."
— The Urban Dictionary
Advertisement:

Ah, the Unibrow. Not generally considered the most attractive kind of facial hair on the marketnote To us in the modern western world, at least. see below.. So like most kinds of unfashionable/unattractive appearance, characters sporting one are mostly consigned to being either evil, or comical.

If a female has one, it's typically meant to show that she's unattractive. These are a typical uncool feature of Nerd girls.

Examples of Type I: