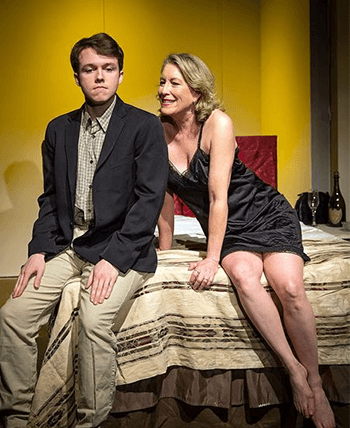 "For shit's sake Mother, how short is the list of guys you haven't screwed?"
— Sterling Archer, Archer
Advertisement:

No, not that Mrs. Robinson. Or that one. Or that other one. Or the mean one. Or even the bizarre one.

Older women with a taste for the younger kind (no, not that young — well, not usually...).

Mrs. Robinson is usually much older than her lover, and her lover may or may not be willing. Even if the younger party is unwilling, not all people are sympathetic to their plight. When she is also in a position of power in regards to her lover, the trope overlaps with Mistress and Servant Boy. In some cases, the boy is just some Unlucky Everydude, feeling isolated and looking for love. In more comedic situations, a Casanova Wannabe or Chick Magnet may attract the attention of a much, much older woman — which he desperately does not want!

With the genders reversed, you almost always end up with a Dirty Old Man on one side and an innocent girl on the other. Since Mrs. Robinson is sometimes portrayed sympathetically, this may be an example of a Double Standard.

Unlike Mum Looks Like a Sister, where an older woman retains enough of her youthful beauty and vibrancy to pass for someone twenty years her junior, Mrs. Robinson is clearly and visibly in the twilight of her girlhood glory, making her need for validation even more sympathetic (or pitiful) to the audience.

Unlike a May–December Romance, it's not the actual age which is problematic, but rather the apparent age that causes so much Squick.

Compare to Teacher/Student Romance, White-Dwarf Starlet (seeking younger men is one way for a fading actress to sustain her illusion of youth).

Fille Fatale and Likes Older Women are inversions. Contrast Dirty Old Woman, who's even older and Played for Laughs.