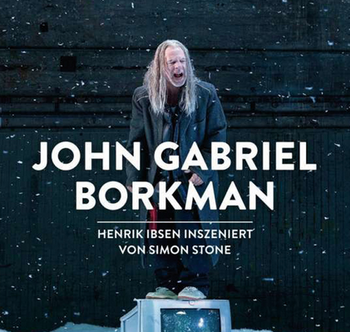 Cover of one of the renditions.
John Gabriel Borkman is the penultimate play of Henrik Ibsen, written in 1897. It might easily be interpreted as his last one, with When We Dead Awaken as an afterthought. The play is a story of old men and women, concentrating on the life of the titular character, and his effect on people around him.
Advertisement:

Born as a son of a miner, Borkman grew up with steel all around him, and it made him tough. He became a self made man, with great economical ambitions, started a bank, and wished for national dominion, if nothing else. In his youth, he was enamoured by two sisters, Ella and Gunhild. Ella was the one who warmed up to him most, but he chose the other one, and Ella seemingly never got over him. Borkman and Gunhild had a son, Erhardt, a boy Ella took a shine to.

Then it all fell apart. The bank collapsed, and with it all the great ambitions of John Gabriel Borkman. He was left bankrupt, but Ella Rentheim intervened, saw to it that he and his wife kept their estate, although she was the actual owner from that point. Furthermore, because Borkman had to go to jail because of accusations of fraud, she raised Erhardt Borkman as her own child for some years. Later, Borkman was released from prison, and returned to his mansion, where he restlessly brooded in the upper floor for eight years, hardly seeing his son, let alone his wife. All his friends abandoned him, except one, an old copyist and poet named Wulhelm Foldal, who regularly showed up to comfort him.

Erhardt Borkman became a student, and took a shine to Fanny Wilton, a widow somewhat older than he. She also cared for Frida, daugher of Foldal. Ella shows up at the mansion to claim her right and to set things straight, because she is terminally ill. In the process, she confronts Borkman in his room, and his wife follows suit - underlining an old Love Triangle between them. Borkman decides to leave his room, for the first time in years, and goes out with Ella. At the same time, his son Erhardt decides to leave for Europe with mrs Wilton and Frida. The old ones are left alone, and Borkman goes out in a cold winter night, seemingly restored. Then, his heart gives in, and he dies in the snow. The two sisters are left alone with the dead old man, settling every score between them.