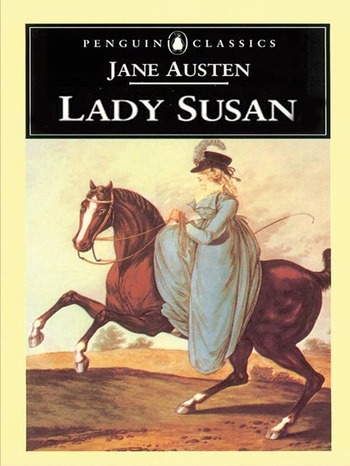 "Frederica shall be Sir James's wife before she quits my house, and she may whimper, and the Vernons may storm, I regard them not. I am tired of submitting my will to the caprices of others; of resigning my own judgment in deference to those to whom I owe no duty, and for whom I feel no respect. I have given up too much, have been too easily worked on, but Frederica shall now feel the difference."

In 1871, Jane Austen's nephew James Edward Austen-Leigh published a 2nd edition of his biography of his aunt, including fragments of unfinished works and one previously unpublished brief Epistolary Novel. The untitled text is theorized to have been completed around 1805. Austen-Leigh titled it Lady Susan, and the eponymous Rich Bitch is to her story what Heathcliff is to Wuthering Heights — a conniving, selfish, amoral Villain Protagonist who causes misery and strife for everyone who comes in contact with her, except with no Freudian Excuse and zero redeeming qualities.

Received a film adaptation in 2016 that was, oddly enough, titled Love and Friendship (and, of course, has nothing to do with Love and Freindship).