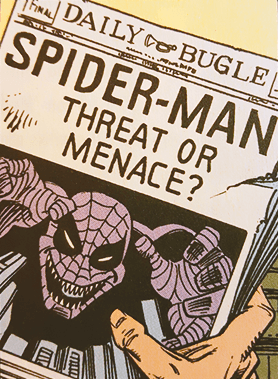 "It is not slander! I resent that! Slander is spoken! In print, it's libel."
"A lie can run halfway round the world before the truth has got its boots on."
— Mark Twain (Allegedly)
Advertisement:

Rumor, gossip, tale-bearing. Ever present whenever people talk, and sometimes truly vile. And when they are malicious tales about The Hero, they are an unbounded source of problems for him.

Except in unusual cases, we already know in advance that the tales are false, usually by seeing the true events, or seeing his POV during them so we know his true motives so that the Infallible Babble effect is undermined. We just get to see the character wrestle with — and suffer under — them.

Sometimes the original slanderer can be identified (and sometimes punished), but often enough the hero has to deal with a cloud of unidentifiable nastiness. Who is acting out of malice, and who out of carelessness or indifference to the truth — or even desire to warn — may be ambiguous. It makes being arrested look easy: there, you can get through the trial and be acquitted. And often crucial people are really gullible.

The Hero with Bad Publicity often lives in a cloud of this. Wounded Gazelle Gambit is one way of launching them. Gossipy Hens are always launching or spreading them — with or without malice. The Green-Eyed Monster often inspires slander, The Resenter, No Hero to His Valet and Somebody Doesn't Love Raymond will always agree on slanders, and the envious person may even believe his own slanders. The Decadent Court is rife with it, but even there, the Evil Chancellor is particularly prone to it. In many situations, this helps fuel Divided We Fall. Gossip Evolution doesn't exactly help the situation for any of these. The Propaganda Machine often churns it out. Children are often the butts of the subtrope Loser Son of Loser Dad. Torches and Pitchforks are often stirred up with malicious slander.

When spread intentionally, like in Insidious Rumor Mill, the slanderer often acts with Chessmaster-like precision. Frequently he will tell the entire truth with only a few crucial omissions or alter the import of facts by subtle misrepresentations — knowing that Gossip Evolution will turn the hints into full-blown lies.

Compare Shrouded in Myth for another problem the hero can have with rumors. See also Bearer of Bad News, who may be accused of this, and Propaganda Piece.

No Real Life examples — suffice to say that all propaganda contains elements of this, but to what extent is highly debatable. Too much chance of Flame Bait — besides which, we don't want this to be a Self-Demonstrating Article. We should note that this trope is not exactly the same as malicious slander/libel/defamation in strictly legal terms; in the law of defamation, "malice" means (in most jurisdictions, including, most importantly,note In legal terms: besides being the law applying most directly to This Very Wiki, American law is the one that gets the most mileage out of the concept of "malice" the United States) publishing/disseminating false information about another either knowing that the information is false (i.e., saying things you know are not true), or recklessly disregarding the possibility that it is false (i.e. saying things that might or might not be true but which you have no basis for saying, and if they happen to be true, it's an accident). The above standard, commonly known as "actual malice", comes from the 1964 Supreme Court case New York Times v. Sullivan note 376 U.S. 254 (1964), the case revolved around an ad taken out in the Times by Martin Luther King Jr. that the police commissioner of Montgomery, Alabama, noted had factual inaccuracies. He sued the Times for taking the ad, Alabama courts found in favor of Sullivan, and the Times appealed the ruling up to the Supreme Court, which overturned the lower courts' verdict in a 9-0 decision, noting that the civil penalty was inconsistent with the First Amendment. and applies mostly to public figures, such as politicians and celebrities. It's why it is extremely hard for a celebrity to win a libel suit in America — one of the few successful suits was one filed by Carol Burnett against the National Enquirer for falsely claiming she had been drinking heavily with Henry Kissinger in 1976. While malice is important in suits against non-public figures, more weight is given to the falsity of the statement and the effect it has on the defamed's reputation. Simply repeating something you heard doesn't generally count, so in general terms, ordinary town gossip isn't going to get you very far in a slander/libel/defamation suit.note This can be important, as it can govern liability (depending on where you are and who is suing who, someone suing someone else for defamation/libel/slander may need to prove malice, and, generally speaking, punitive damages, if they are available at all, would only be available if the defamer spoke/wrote with malice). However, mere gossip can be enough to be this trope. Please note, however, that TV Tropes is not legal advice and so still proceed with caution.

After finishing a GDI mission where you saved a town from being wiped out by the Brotherhood of Nod, a cinematic plays featuring a reporter in front of a scene of destruction, falsely claiming that the aforementioned town was wiped out by GDI forces. It then cuts to a green-screen in a studio, where Kane begins to give orders on the distribution of the propaganda video, before noticing the camera and shooting it.

Example of:
Is This Thing Still On?

After finishing a GDI mission where you saved a town from being wiped out by the Brotherhood of Nod, a cinematic plays featuring a reporter in front of a scene of destruction, falsely claiming that the aforementioned town was wiped out by GDI forces. It then cuts to a green-screen in a studio, where Kane begins to give orders on the distribution of the propaganda video, before noticing the camera and shooting it.