Film / Gold Through the Fire 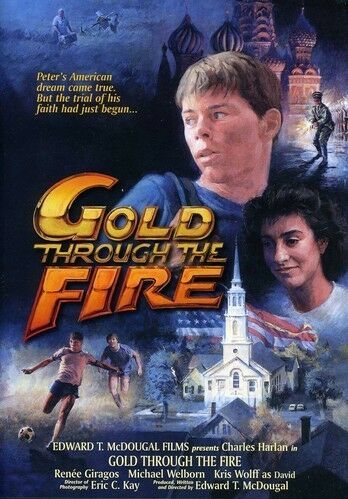 In the Soviet Union, Russian teenager Pyotr Smyslov is harshly persecuted along with his family for being Christians. After the police arrest his parents for illegal printing of Bibles, he's sent to a juvenile detention center. Pyotr decides to leave. Escaping the center, he crosses the border to Finland, and gets asylum at the US embassy. Flown to the US, he's taken in by an American couple with the help of a Christian organization. They are also Christian, but much less than him. Pyotr, now known as Peter, finds it difficult to fit in. He's mocked by kids in high school not only for his accent, but also due to being outspokenly Christian. Along with them, the school principal rebukes Peter for holding Bible classes while on lunch breaks, along with voicing his creationist beliefs in biology class. Peter refuses to sign an apology over the latter or stop doing either of these things, and is suspended. He convinces his foster father, a lawyer, to sue the school and the case ends up in court. In the meantime, he's also harassed by Soviet KGB agents who try to coerce him into returning by threatening his imprisoned family. Peter also tries to draw his foster brother back into the fold, as he's no longer interested in Christianity.