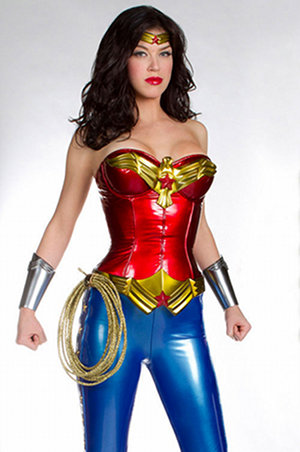 Adrianne Palicki as Wonder Woman. Note the Painted-On Pants, soon to be darkened.
Q: Hey. Wait a second. So Wonder Woman "has come to the world of men and is using her powers to make a difference"? And she has a major corporation bankrolling her crime-fighting endeavors? That's just Superman combined with Batman. How is any of this unique to Wonder Woman?
A: Well, she has breasts. Superman and Batman don't.
— Topless Robot, "The Wonder Woman TV Pilot FAQ!"

Wonder Woman is a never-aired television pilot produced by Warner Bros. Television and DC Entertainment for NBC, based on the DC Comics character of the same name. David E. Kelley wrote the pilot and Jeffrey Reiner directed it. Adrianne Palicki starred as the main character, Elizabeth Hurley plays the villainess, and Pedro Pascal appears as Diana's contact with the police.

The Wonder Woman pilot was expected to air in 2011, but NBC opted not to buy the series. Although it was never distributed officially, copies got out (though an incomplete version that had yet to have a final musical score and special effects added). One of Diana's uniforms ended up being recycled on Harry's Law by Smallville alum Erica Durance, playing a delusional client who believes she's the real Wonder Woman.