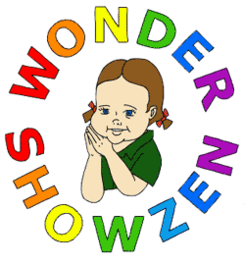 Kids' show, kids' show/oh good lord it's a kids' show
"WARNING: WONDER SHOWZEN CONTAINS OFFENSIVE, DESPICABLE CONTENT THAT IS TOO CONTROVERSIAL AND TOO AWESOME FOR ACTUAL CHILDREN. THE STARK, UGLY, PROFOUND TRUTHS WONDER SHOWZEN EXPOSES MAY BE SOUL-CRUSHING TO THE WEAK OF SPIRIT. IF YOU ALLOW A CHILD TO WATCH THIS SHOW, YOU ARE A BAD PARENT OR GUARDIAN."
— The content warning that opens every episode
Advertisement:

Wonder Showzen was a grotesque Black Comedy parody of Sesame Street by art collective PFFR that managed, against all odds and Executive Meddling, to last two complete seasons on MTV 2 between 2005 and 2006. It features delights such as: