Dream Within a Dream 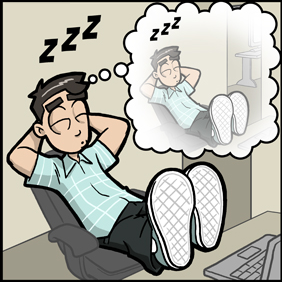 "Is all that we see or seem but a dream within a dream?"
— Edgar Allan Poe
Advertisement:

There are two different variations of this. One is where a dream plays out and a character falls asleep in the dream world and has another dream (usually something incredibly abstract and trippy, this may be from deep in the subconscious) before eventually "waking" back up into the "real" dream world where the original dream continues (other stuff may have happened in the original dream while they were "asleep"). The other, more common variant is what's known as a "false awakening" which really isn't so much a dream within a dream as it is dreaming about waking up while still asleep in reality. In Real Life, along with the "dream within a dream" and "false awakening" occurrences is a final variation where someone falls asleep in a dream and as a result wakes up in reality.

If taken far enough, and if all the many-layered dreams are substantially the same, what you can get is a "Groundhog Day" Loop.

Sometimes will pull a twist by having a character wake up from a dream, then something else bizarre happens, and an altogether different character will wake up from that dream.

. A "dream within a dream" in this context may also be known as a double dream.