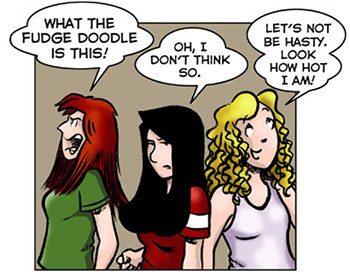 They just saw the Hotter and Sexier version of themselves...
Advertisement:

is a webcomic by Michael McKay-Fleming that started being published online in 1999. It tells the story of Alice Dobson who lives with her father in a quiet Canadian town. Alice is a Miss Imagination Cloudcuckoolander whose fantasies tend to spill into the real world — much to the annoyance of her more down-to-earth best friend Dot, who nevertheless often finds herself joining in on the various (mis)adventures. Another friend, the boy-crazy and ditzy Joanne, also joins them on occasion, making them form a classic Comic Trio.

Other important characters in the comic are Alice's always-off-screen mother (who lives in Europe and seldom sees Alice but whose absence is heavily felt) and her father's new girlfriend, Joan, with whom Alice has a complicated relationship — she really wants to hate Joan and treat her as the classic Wicked Stepmother, but has problems doing so because Joan is so fundamentally likable.

The comic has a lot in common with Calvin and Hobbes (which it occasionally references and gives more or less obvious Shout Outs to) in its mixing of the mundane with the wildly fantastic and overly-imaginative protagonist, but it's more obviously a fantasy comic; Alice's fantasies aren't only for her but tend to drag other people (most often Dot) along, and as such it's not always easy to know what's real and what's imagined. Alice is also more inclined towards longer (and often recurring) storylines rather than stand-alone gags.