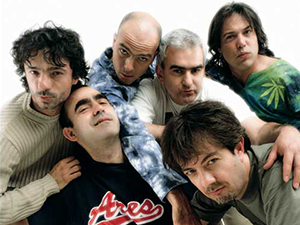 ("Elio and the Troubled Stories"), often shortened to EelST or "Elii", are (to make a long story short) Italy's answer to Frank Zappa, and also were one of the most succesful and long-lived Italian bands (1980-2018).

Their history began in the second half of The '70s, when the founder Elio (Stefano Belisari) created a small band with some of his High School mates in Milan. After various changes, the early Eighties saw the arrival of a couple members that still play with Elio to this day: Cesareo (Davide Civaschi), Rocco Tanica (Sergio Conforti) and Faso (Nicola Fasani). EelST began touring Northern Italy since about 1985, and their songs began circulating among the youth in the form of bootleg tapes; the first commercially published songs came only a couple years later. They also started appearing on Italian television in the late 80s, and 1987 brought about another member, the multi-instrumentalist Feiez (Paolo Panigada), who raised the already high technical level of EelST's musical proficiency.

The '90s were arguably the peak of their popularity, since EelST recorded in this period some of their best-selling and most successful albums, and went on to make numerous appearances on cult classic TV programmes, radio programmes and so on. In 1995 their official fan club, "Fave Club", was born, and the next year they were contestants at the Sanremo Music Festival

, Italy's most important music competition, getting second prize (even though a never-confirmed Urban Legend states that they actually won first prize but the host refused to give them the prize and gave the victory to another singer). Sadly, amidst all the fame and successes, tragedy stroke when Feiez suddenly died on the spot during a concert in December 1998. As they commented, he died exactly as a musician would have.

After Feiez's demise, they reduced their appearances on TV and the live concerts, only restarting in about the mid-2000s. Since then Elio and the others made such things as sport and commercial jingles, hosted TV programmes, played in classical concerts and more. The band has also been the first one, in 2004, to sell instant CDs of their live performances immediately after their end. Oh, and they went again to Sanremo in 2013 and won second prize. Again. For real this time. 2016 saw their third Sanremo participation but they only got to 12th place this time.

In 2017, after almost four decades of career, they announced their retirement and the date of their last live concert ever: December 19, 2017. However, they said it wasn't really true and that they wanted to do one last tour in 2018. They also went to Sanremo in 2018 one last time but their song was voted dead last; they took this in stride because they used to say half-jokingly they always wanted to get the last place in that competition.

The style: Their lyrics are largely nonsense mixed with puns, references, allusions to popular sayings and to facets of their youth, with generous heapings of Toilet Humour (especially in the early days), dark humour and even social/political Satire; the weirdness of their humour, however, belies their extreme technical proficiency (again, just like Frank Zappa, who can be considered one of their sources of inspiration). EelST have dabbled in almost every possible genre from hard rock to disco, from reggae to blues and even latin and opera, often mixing them to an extent or spoofing their rules and conventions.

Please do not mix up EelST and Eels.

The band and their discography provides examples of: