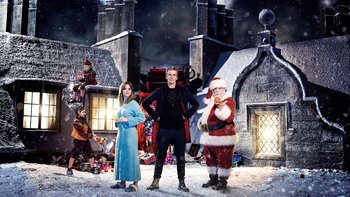 Christmas in peril, what's Saint Nick to do? Why, recruit some new helpers: a girl and a Who! But this Who's not a Who down from Whoville, you see: he's a Time Lord who walks in eternity!
Click here to see the Radio Times magazine poster for this episode: 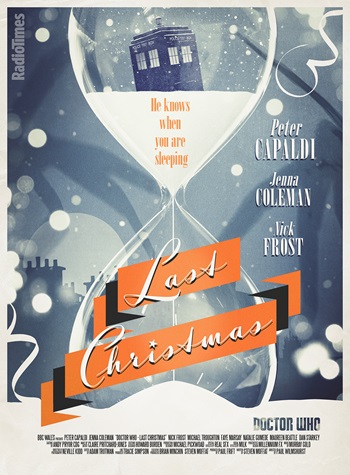 But do you know if you're awake? You better find out for goodness sake!
"So, are we going to stand about arguing about whether I'm real or not, or are we going to get busy saving Christmas?"
—Santa Claus
Advertisement:

The one with Santa Claus.

Written by Steven Moffat. The 2014 Doctor Who Christmas Episode.

Gather round, children, it's story time! The tale of "Last Christmas" we'll now tell ... in rhyme!note We apologise in advance... Now on with the dance.

'Tis the night before Christmas; that brightest of days! And the Doctor and Clara have parted their ways. Though Gallifrey's gone still and Danny Pink died, each claimed to be fine -- and each of them lied.

Then out on the roof, Clara hears such a clatter, go outside she must and see just what's the matter. And what to her wondering eyes should appear, but a miniature sleigh, and eight tiny reindeer!

(And two comedy elves, one hight Wolf, one hight Ian. But this meter's a wreck, as by now you are seein'.)

It's Santa alright! Though he tries out a fib, the elves and the flying deer botch his ad-lib. So Saint Nick gives the gifts? But he's fake! Are you mad?! "Well, who do you think does it? Your Mum and Dad?!"

Clara's grown up past all those fairy-tales; she stands her ground, giving Santa No Sale. Then up on that roof there's a wonderful sound — the TARDIS! It's back! Is there sense to be found? The Doctor pops out, attack eyebrows half-mast; he wants Clara inside, and no questions asked.

Both the Doctor and Santa Claus know what’s at stake. There's a stand-off; the Doctor leaves Claus in his wake.

The Doctor looks ashen; all portents cast gloom – there’s monsters afoot, and humanity's doom. But there's one great big question, where all our fates rest. "Believe you in Santa?" To which Clara says "Yes."

Cue the main theme! — but longer, in seasonal cheer, and with Nick Frost's name featured since he's guest starring here. It seems the Time Vortex gets snowy sometimes — but anyway, let's just get back to the rhymes.

Now we're out on a base in the freezing North Pole, with a girl who’s about to try taking a stroll through the base’s infirm'ry, with "sleepers" inside: think of them and they'll leave you with no place to hide.

Shona starts walking, trying not to get caught; her boss plays some music to help drown out her thoughts. The song "Merry Christmas Everybody" is played! She'd better keep moving, or else she'll get slayed.

There's three other people inside that base, actually; there’s Professor Albert, and Bellows, and one named Ashley.note Albert's played by Michael Troughton: Patrick Troughton's son, wouldn't you know! Yep, yet another Troughton appears on the show... And hey, looks like you'd better add on two more. You see, the Doctor and Clara just burst through the door.

"Say, who are those folks lying there in that bed? With those facehugging Dream Crabs clamped around their head?" And they've thought of them now, so the sleepers attack. And the Dream Crabs descend! And they can't drive them back—

But, quick as the jingle of bells on a sleigh, Father Christmas is there, and he's saving the day! But why the hell's Santa Claus coming at all? "Christmas Day! In the North Pole! Who you gonna call?"

The Dream Crabs recede, and the sleepers take pause; they're back in their beds again, ordered by Claus. Everyone's still alive, thanks to his well-timed visit. But that's not the end of the problem, now is it?

See, the Crabs use a certain grim method to feed. They put you to sleep, make you dream, then proceed. So they'll spin you some dreams within some other dreams, THEN they'll suck out your brain. "Mercifully." There's no screams.

So is this all a Crab dream? What's real and what's not? What never existed, and what's been forgot? note And maybe that snow isn't even real snow! Just like all those other times; that'd sure blow... It all looks so life-like! It all looks uncanny! Especially when Clara wakes up, and there’s Danny!

But time’s running out. If that chalkboard’s not lying, it has three awful words for her.

Okay, the rhyming is over. You're safe now. Time for tropes:

"Every Christmas is last Christmas."